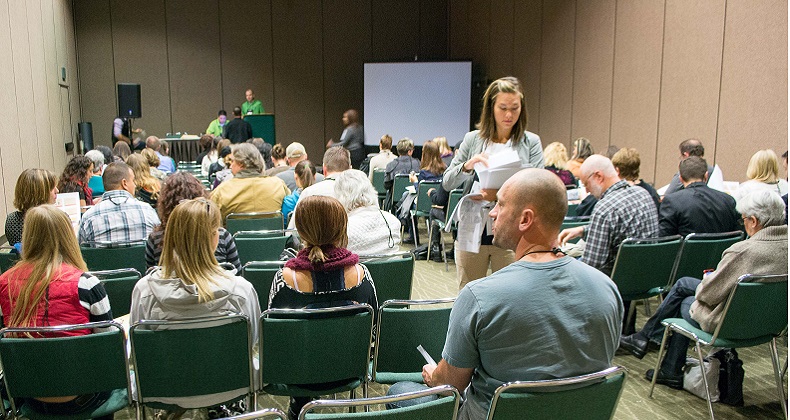 Learn something new at a conference

I have organised, presented at and attended more conferences than is probably good for me. I have always been in favour of multi-track events with many sessions at the same time. My experience at the last two conferences I attended, both of which had over 15 simultaneous sessions, has changed my mind.

All too often I find myself, and I am sure others do to, selecting the session on a subject I am already interested or knowledgeable in and ignoring sessions that I just don't see as being relevant to me. As a result so often I leave a session feeling disappointed as I "already knew all that stuff" and didn't learn anything or benefit.

Over Christmas I attended a multi-track conference, Limmud, where as an experiment I deliberately decided to attend sessions that I knew nothing about. Often I selected them by sticking a pin in the program. It was the best conference that I have ever attended for my own personal development. I learned so much and came away wanting to find out even more about many of the topics. Of course there were a few choices that were duds - but that happens even when you select the session more carefully.

Last week I attended a similarly sized conference, DrupalCon, which also had a wide variety of sessions on offer to satisfy the perceived interests of the attendees. This time, as usual, I went to the sessions that I was interested in. As a result I found myself leaving the session with a feeling of disappointment that I had heard it all before and hadn't learned anything new.

That is NOT the fault of the speakers. They, almost all, had good presentations with important information to share but they had made a critical mistake. If your attendees are selecting the session based on their interests then they are almost always not beginners. You don't need to spend the time explaining the basics and the concepts - that's not what the attendees want - they already know that. They want to hear about new developments, techniques to apply and new tools that are available.

At DrupalCon there were a lot of sessions regarding Accessibility, Codes of Conduct and Diversity and Inclusion. Three topics that I am interested in. But did I learn anything new? No not really. Did I spend the majority of the time in the session waiting for the introduction to end and the content to begin? Sadly yes and in some cases the "content" never began. The entire session focussed on the why the topic was important. We were the wrong audience for that. We were already sold on the why - we were attending because we wanted to know the how. For example I don't think there will have been many people at the conference who would not have been aware of the importance of accessibility. But the only people at the sessions were those already working in that area.

At a massively multi-track event the vast majority of attendees will make their choices by selecting the topics they are interested in. No amount of blog posts like this will change that behaviour. So unless you are presenting an "Introduction to" session the speakers should skip the why and concentrate on the how.

But that doesn't address the bigger issue. If we want to raise awareness on an issue, whether it be technical or communal, a multi-track event doesn't facilitate that. I don't believe there were many that attended a diversity session that did not have a specific personal interest. As a result all the good intentions of the speakers was lost by talking to the converted instead of to the masses.

Is it time for large multi-track conferences to change their approach. Should we be adopting a more TED style event with a single track of shorted presentations? Or maybe include more "keynote" sessions for all. Without a change in approach we will never be able to truly have an impact. Conferences will remain echo chambers. We will hear what we want to hear and never expand our horizons and learn something new.