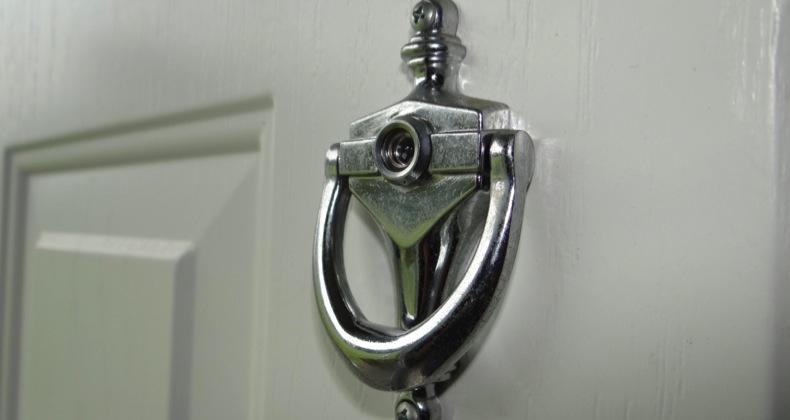 Walking down the street in a leafy suburb of a town in northern England I stumble across a large bunch of keys on the street. I don't know whose keys they are as there is no handy name tag or address but there is clearly a chance that they will open the lock of one of the doors in one of the houses on this street.

I can't resist the temptation to see which door these keys will unlock and what goodies I can find inside. I'm an inquisitive person, I'm not a thief looking for riches, I'm just a nosey person looking for the thrill of adventure and a good story to tell in the bar.

Now, obviously I don't want to walk up to every door on the street and try every key. I can see that one of the keys is a Yale key so the first thing I can do is quickly walk down the street and identify all of the doors that have a distinctive Yale lock. Then under cover of darkness and wearing a disguise, I always knew that false nose and moustache would be useful one day, I can return to those few doors that I have already located as Yale locks.

The key doesn't fit in the first four doors but on the fifth door I turn the key and hear the click of the lock successfully opening. Unfortunately there is a second lock on the door, a much stronger 6 lever tumbler Chubb. But that shouldn't be a problem either as I have a big bunch of keys with several Chubb's to try and surely one of them will fit.

Success - the lock turns, the door opens and I'm in. Now let's see what I can find - I had better be quick as I've no idea when the owner may return. I feel like Indiana Jones on a great adventure.

There is no cash lying around and no unsigned credit cards sitting on the table - I couldn't be that lucky could I? On the walls are a lot of photos of a dog called Bertie, he looks like the type of dog that could have given me a nasty bite - I'm lucky Bertie isn't in the house today.

In front of the mirror in the hallway is a small table with plenty of letters, some birthday cards and a pay slip, but I can't find anything of any obvious monetary or real souvenir value to me. The only thing I could find to take was a spare set of back door keys with a fairly interesting adult novelty keyring.

For the lolz I scribble on the mirror Power to the People! in a rather fetching shade of crimson coloured lipstick that just happened to be there. (I'm not in the habit of carrying lipstick with me when I am out trying to invade other peoples homes.)

I quickly take a photo of the mirror and table, I need proof of my adventures, and after no more than 5 minutes in the house I leave. But being a nice guy I lock the door behind me.

Later that day Jack arrives home only to realise he has lost his keys and must wait for Dianne before he can sit on his sofa and chill out with a warm beer (I did say he lived in England). After standing in the rain for 45 minutes he spots Dianne walking down the street with a face that looks as if she is going to kill him. But when they open the door and find that their is nothing missing and just a strange message written with her favourite lipstick on the mirror she calms down. The mirror can be cleaned, the locks can be changed and Jack can buy Dianne a new lipstick.

They all lived happily ever after ...

Remember this is a web site predominantly about Joomla and web site development so is this fairy tale really all about lost passwords, defacements, backdoors and social engineering?