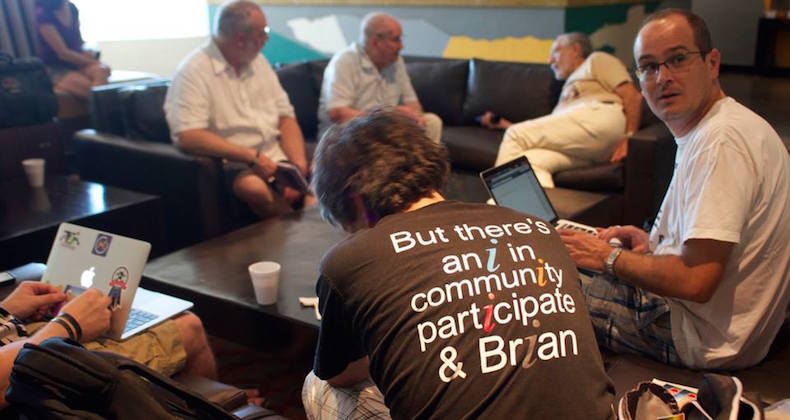 I have just returned from the third Joomla World Conference and I think it is positive to reflect on the event - the good and the bad. In my JoomlaIgnite session I said it is "good to fail" because that means you are trying hard and that the challenge is to recognise those failures and react quickly.

It is no secret that I was not in favour of creating an event at a beach resort in Mexico. My main objection was that creating an event where people were encouraged to attend with their families would destroy the community feeling.

In reality only a few people brought their non-joomla partner so that never happened. However as the resort had sixteen different restaurants mainly with small family size tables it was difficult, if not impossible, for me to sit down to eat with different people each time. I struggle to think what it was like for the newcomer who knew nobody before the event to find people to dine with. I do know there was a lady I met when I arrived at the resort that I never saw again. I hope she didn't spend the event eating on her own or retiring early to her room. The highlight of any Joomla event is the people that you meet and the friends that you make and I'm not convinced we achieved that atmosphere this year.

Is it the Joomla Conference?

I arrived at the event thinking that the program for JWC was a massive fail. When I looked through the sessions I felt that the level and type of sessions were more at the level of a JoomlaDay than the World Conference.I now realise and appreciate that this is not a failure in the event - it is a failure in my perception of the event.

To me the World Conference is the highest level event in the Joomla calendar and it is where the future of joomla is debated, discussed, planned and decided. And that is definitely the perception I have observed when talking to others around the world on my Joomla travels. The reality is something different.

Talking to the organisers I can see, understand and agree that their concept was to create an event that "reaches the parts that other events do not reach". What does that mean? It means that the event serves as an outreach event to attract and build community in areas where we are weakest - for this year it was for the hispanic speaking community - clearly a success. And a student outreach program in Mexico - again clearly a success.

Is it a Conference?

Chatting to Ronni and Jon I said that it was the name that was the issue. To me it's not a conference but something else entirely. But what should it be called? It came to me on the plane home. It is not a conference but a Celebration!!. So maybe next year in India we can rename the event to Joomla World Celebration - notice you can still call it JWC - wink, wink - and it is our 10th year - let's celebrate.

Is it the Joomla World?

We have to be honest here. We have a community of individuals and small businesses that even without high costs to travel to the event just can't afford to be away from their businesses for a week.

I was one of the lucky few able to attend JWC14 because of the JET program that paid my expenses. If we look at the attendance from Europe, relatively wealthy, there were almost no attendees at all. The situation was worse for Africa, Asia and Australasia.

So no it is not a gathering of the Joomla World it is however an annual gathering of Joomla that moves around the World. Can we do something about that? Yes we can.

Next year I would love to see a satellite program. We still have the main event in India but we live stream it to satellite audiences across the world. To be clear I do not mean an online event where people sit in front of their laptops and watch the presentations on their own. That is not community.

I mean that in different locations around the world Joomlers can gather together to watch the live feed from India. Perhaps with additional local speakers. Perhaps with local translators. With this we can really make it a Joomla World Celebration.

I hope you can see now that in my eyes while we failed in some aspects it was just a matter of perception and not a real failure. Something that all together we can work on for next year and so that we can continue to fulfill the aim of Spreading the JoomlaLove across the world.

Let's not limit ourselves to planning an event for 800 in India let us all together create an event in every country of the world, in every language of the world and for every Joomler in the world.