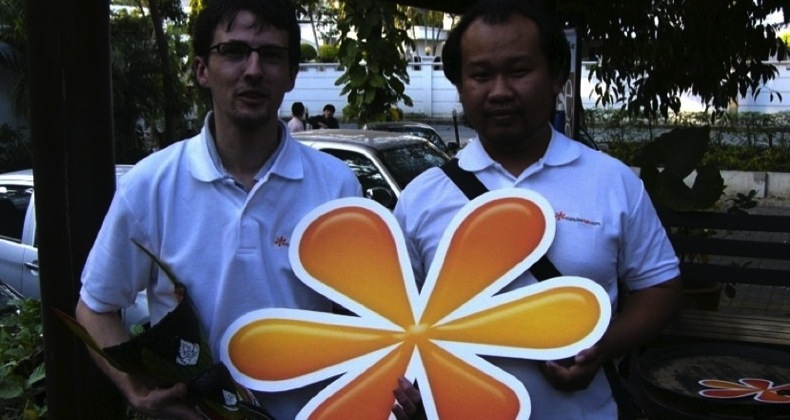 Thailand, Mambo and the Tsunami

On December 20th 2004 I set off on my travels. This time I was going to go white water rafting and trekking in the Jungles of Western Thailand on a guided trip supported by elephants.

As a committed off-beat traveller I've been to Thailand many times before but this trip was going to be a little different.

Over the previous few months I'd heard good things coming out of Thailand in relation to Mambo. The occasional postings in the forums at http://forum.mamboserver.com/ and announcements of Thai language versions of Mambo and various components at http://mamboforge.net/ had intrigued me.

Not being able to speak or read Thai the information at http://www.mambohub.com/ was a mystery to me but the photographs sparked an interest. What was happening in Thailand? Was Mambo really as popular as it appeared and what was going on here?

As I had a spare day in Bangkok, the capital of Thailand, at the start of my adventure I decided to contact Mambo Thailand to see if I could arrange to meet them for a drink or perhaps a meal. A quick exchange of e-mail and instant messages revealed that Ninekrit and Cherry had other ideas. My idea of a relaxing beer in a bar was soon replaced with a full blown meeting of Thai Mambo users with a guest of honour making a full 2 hour presentation on "Mambo - the Past, The Present and The Future". And I was to make the presentation.

So along with my walking boots, trekking poles, life jacket and sleeping bag I left Heathrow airport, in London, with my presentation on a CD. [Not trusting the airline to deliver my bag in one piece, or on time, I was taking no chances with the CD, a copy was given to every person I was travelling with and I also had copies stored on the memory card of my camera and on my usb watch.]

After two flights half way across the world I arrived in Bangkok early on Saturday morning. Even though my body said it was 2am the clock on the wall said 9am and it was only a few hours to go till I met Ninekrit and Cherry. After a drive across the city battling through traffic I arrived at my hotel ready for a hot shower, change of clothes and large cup of the most caffeinated coffee i could find.

Sadly the hotel had other ideas. The room would not be ready for another 3 hours and the coffee shop was closed for refurbishment. A quick bit of lateral thinking, and the fact that I had stayed at this hotel before, and I was washing in the shower by the swimming pool and attempting to shave using a cigarette lighter for a mirror. I could hardly meet the Thai Mambo community in the clothes I had been wearing for nearly 48 hours and a 2 day growth on my face.

So feeling semi-refreshed, but still in need of a coffee to keep me awake, I sat in the hotel lobby waiting for Ninekrit and Noon to pick me up to take me to the meeting. How would they recognise me? How would I recognise them? I hadn't thought of that so I sat there in the lobby with a hastily drawn Mambo flower and my stack of CDs with the presentation, smiling at everyone who walked through the door.

I needn't have worried. They arrived on time and wearing a very smart golf shirt with a Mambo Flower embroidered on the front and www.mambohub.com on the back. Greetings over we hopped in the car to battle through the traffic to cross Bangkok for the restaurant where the meeting was to take place. For the next few hours we sat and ate a luxurious meal whilst I was briefed on all the work that Mambohub had done in the previous few months.

2:30 and the witching hour was approaching. It was nearly time for my presentation and I had to prepare. Kittiwat and Cherry would be working as my interpreters, which was to be a first for me. I've made several presentations before, although not on Mambo, but I've never had to work with an interpreter.

We soon had the projector working and my presentation was loaded onto the PC. I was ready to go. The room was starting to fill and the video cameras were setup. Video cameras? "Ah yes" said Cherry "we've an interesting mix of people coming to listen to the MamboMan. As well as existing Mambo users, graduates of the training course and experienced web developers there's someone from the Government news agency and the President of the Thai Webmasters Association. About 50 people all together.".

Crikey! This really is starting to sound like a major event I hope I can live up to their expectations.

3.00pm and we're ready to go. My presentation is ready, the projector is on and the introductions are made. And then just when I was ready to start the projector decided to go to sleep. A quick fiddle with the cables and everything is working again. Don't panic Brian everything will be fine.

4.00pm and its time for a break. I've spoken for an hour and by some amazing coincidence, or was it skill, I managed to finish the first half of my presentation exactly on time. The restaurant had laid on an amazing spread of international cuisine. The sandwiches and pizza were particularly popular although the swiss roll sponge cake was obviously not to everyones tastes.

Re-loaded with caffeine it was time for the final part of the presentation, Brian's favourite Mambo sites, and Questions from the audience which hopefully I would be able to answer.

4.45pm the presentation is over and I can start to relax. Now it was time for the exchange of gifts. Being nearly Xmas I'd brought with me a traditional Xmas pudding and Mamboclub presented me with a traditional tribal mask. . A donation was also made to the Thai Webmasters Association on behalf of Mambo and one lucky attendee recieved a years free domain hosting.

5.00pm and its all over. Time to pack up and rejoin my fellow explorers back in the hotel. But first, for some strange reason everyone wants to have their photo taken with me. I feel like a pop star. If this continues I'll be giving autographs soon.

So meeting over, addresses exchanged and photos taken I left the restaurant enthusiastic about the work Mambo Thai were doing and laden down with boxes of swiss roll and spring rolls to keep me sustained on my trek.

Back in the hotel it was time to pack away the CDs, forget about Mambo and head off to the jungle for my adventure.

I had planned to meet up with Cherry when I returned to Bangkok on New Years Eve. But as we all now know on Boxing Day the Tsunami hit and devasted the southern coastline of Thailand. The country was in a state of shock and all official New Year's Eve celebrations were cancelled as a mark of respect. So I decided to stay with my fellow travellers and celebrate the New Year quietly on the Khao San road. [This is probably the backpacker capital of the world].

Unable to find a table in the crowded bars we wandered from bar to bar sampling the beer as we went. Of course too much beer lead to only one thing. The need to visit the toilet. Now i wouldnt normally take the time to describe the toilet facilities in the bars but all have these had one thing in common. Above the washbasins people had placed stickers advertsing the website http://www.backpacklife.com/. A Mambo powered site and one of my personal favourites.

So at 00:00 on the 1st Jan I raised a glass of champagne and toasted the New Year, knowing that now Mambo featured in the restrooms of Bangkok the future was bright.

Footnote: On returning to England I was to discover that Noon had left Bangkok in the wake of the Tsunami to volunteer in the devastated coastline.

This article first published at www.mamboserver.com