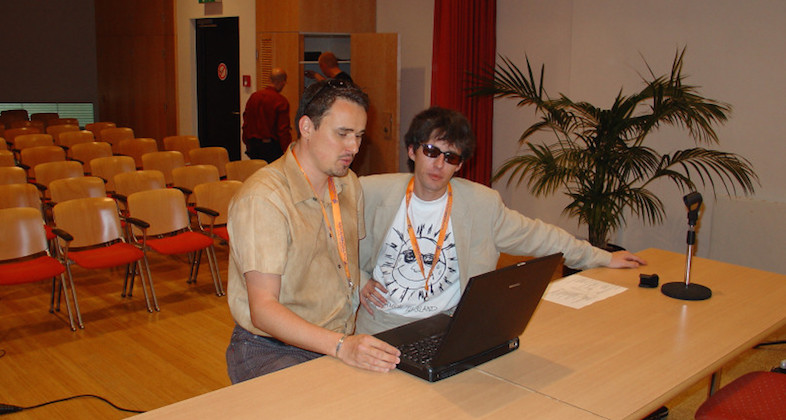 10 years ago today I set off on my travels for my first whole day community event. (Obviously it was called a MamboDay and not a JoomlaDay back then as it was six months before the "spork"). Looking back on that event it is great for me to see that I am still good friends with many of the people who were there that day.

On Friday the 27th May, 2005, I set off on my Mambo travels again. This time the venue was Bonn, Germany, not quite as an exciting destination as Bangkok, but all the same I was off to meet fellow Mambers.

The event was Mamboday, Germany, and Robert Deutz and his team had promised an exciting event with a full day of lectures, workshops and all importantly an opportunity to meet the faces behind the forum posts and some of the components, templates and modules that have helped to make Mambo what it is today.

I have to be honest and say that I was very nervous about this trip. Not about the flight, I've probably clocked up more hours in the air in the last few years than some people do in a lifetime, but about the language. You see as a child growing up in England we are always taught that if you spoke in English loudly and slowly everyone would understand you.

As an adult I now know that isn't true but sadly its too late now for me to start to learn to speak in another language. I have enough trouble with php without having to learn German. I had arranged for a bi-lingual journalist friend of mine to accompany and act as my translator but sadly she was unable to attend.

I was to be met at Cologne/Bonn Airport by fellow Dev Team member Alex Kempkens who had kindly offered to collect me and take me to the hotel to meet the others. There was a slight problem with my flight as just before scheduled takeoff I discovered that it was to be nearly 2 hours late. Not wanting to keep Alex waiting I decided to send him a quick e-mail.

Grrh e-mail address books. When you don't have it with you, you realise that you don't actually know the address. So instead of e-mailing Alex in Germany I e-mailed Mitch in New York, hoping that Mitch could forward the message on. Mitch efficient as ever didn't take the risk that Alex wouldn't read his e-mail so picked up the phone and called Germany instead. Now why didn't i think of that.

Alex and I have only met once before, very briefly, so I wasn't sure if we would recognise each other. So quickly on the plane I attempted to draw a Mambo Flower, on the back of my airline ticket, to wave in the air as I exited the airport just in case. But as the Australians say , "no worries", we recognised each other fine and set off for the short drive to Bonn to meet some of the others for a drink.

Do you speak English?

Would anyone speak English? Would I have to rely solely on Alex to be my interpreter? Why didn't I study harder in language class at school?

No Worries. We joined everyone in the main square for a drink and without exception everyone spoke English to some level. (Some people probably had better grammar than me). So after a few large weissbier it was off to the hotel for a good night sleeps before the excitement of MamboDay began.

And so the first Mamboday begins

After a typically German breakfast of cold meats and cheese, not a sign of good old English bacon and eggs, we set off nice and early for the Gustav Heinemann Haus, the venue for the days activities. It was still early but the crowds were already gathering. Fearing a riot if the doors weren't opened early the mass of Mambers were welcomed in for a coffee before the event proper began.

Addison Wesley had a small stand selling a wide range of open Source books for people to purchase but the only book anyone was interested in was "Mambo" by Hagen Graf. I'm sure the guy from the publishers was kicking himself that he only brought 10 copies with him to sell. They were all sold in the first 5 minutes. Rumours that copies were later being exchanged on the black market were unfounded.

10:00am and everyone gathered in the main lecture room for the opening session by Alex, "Mambo Roadmap" By now there were almost 130 people in attendance. A number that was to swell to almost 200 by the close of the day.

After a short break everyone divided into smaller rooms for the start of the workshops. These were all well attended especially the one on Mambo-phpshop by Soeren Eberhardt which two people had travelled from the Netherlands specifically to hear.

Not speaking the language I spent my time trying to meet as many people as I could. It is so encouraging to meet so many Mambo users - it makes all the hard work and long hours seem worthwhile. I came back with a notebook full of suggestions and feedback which the Dev Team are working through now. I can't promise that they will all be actioned upon but we are looking at them all.

The afternoon sessions began with a draw for a selection of books donated by O'Reilly and a free years dedicated server hosting from domainfactory.de. And one lucky mamber won a signed copy of Robert Deutz' Mambo Book

After lunch I decided that the weather was too good and the beer too enticing so I sat out in the courtyard with a cold glass of beer discussing "The Meaning of Life, Mambo and the Universe". Sadly for one poor soul who found my company so engaging we talked right through one of the workshops that he really wanted to attend. Hopefully this, together with all the other workshops will be online at www.MamboDay.de soon.

4pm and its time for my talk. "Mambo the GPL , Impressum and You". Not the most exciting of topics but still a very important issue. I was a bit disheartened entering the room to see only 3 people but it didn't take long for the room to fill - and no one left when I explained that it was to be in English and not German. I think the talk went well and there was quite a lively discussion about Impressum - a uniquely German requirement for web sites to display some very full and exacting contact details on your site.

The day ended with a lively panel debate with myself, Alex, Arthur Konze, Robert Deutz and Thomas Kahl. There was some disagreement between Alex and Arthur as to whether Mambo could ever be suitable for the Enterprise marketplace and to the role of the Dev Team in providing guidelines for third party developers. I was unable to fully participate in this discussion but it appeared to me that both sides had a point but that neither was successful in convincing the other. I guess that is one of the differences between being involved in a community project. We don't have to agree all the time. Sometimes its healthier to disagree.

So at 9pm the first ever MamboDay, Germany ended, two hours later than scheduled but everyone was enjoying themselves so much that no one wanted to leave. So much so that some of us stayed for a few more hours solving the world's problems over a cold beer and a schnitzel. The next day over a late breakfast Robert and his team set about planning next years MamboDay. Or will it be a MamboWeek?

This was first published in 2005 at mamboserver.com and was retrieved from archive.org