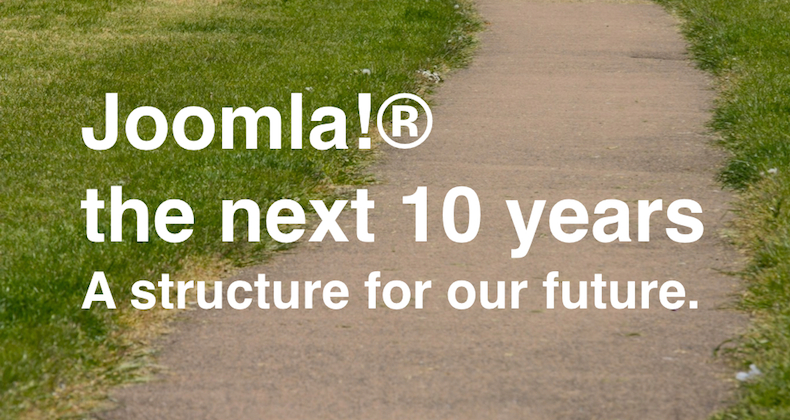 During the Joomla World Conference I was able to present an alternative proposal for structural change for Joomla. Based on a previous blog post the transcript of my presentation and a video of it together with the slides is below.

You can find a transcript of all three presentations and the Q&A session here - thanks to Marijke for taking the time to transcribe everything.

When I ask people to be brave to be bold, to be strong. Because what I am proposing is not new, we've discussed it many times in the past, even back in 2005. The reason why we never adopted it then is Joomla itself wasn't ready we weren't big enough, we didn't have enough people and we just weren't ready to progress to the next stage of our own evolution.

So a lot of leaders, their biggest fear, is will they follow me? If I suggest this will you follow? Well actually if you lead people will follow. That's what people want people want leaders to follow.

So what is the problem we are trying to solve? The biggest problem we have in Joomla is rumours. Rumours always fill the void. They fill the gap. Because we have no transparency there are voids. If we create transparency, as I said yesterday, radical transparency removes the voids, it removes the rumours, it changes the atmosphere.

How do we do that? As Sarah said by reporting to the community. By making every Working Group do a monthly report on the Volunteer Portal or anywhere that is public. So it is reporting down it is not reporting up to management or a board of directors. When I say reporting I mean a sentence, a paragraph. The Translation team could report "This month we had three new translation teams" It might report this month "There were no new releases of Joomla, no new members, nothing to report". The fact is that they made the report and everybody can see them. It also means that everybody can see which areas of the project need more volunteers, because they can see someone say "we didn't have the time to do this". Again - Reporting fills the void of rumours.

So the four big issues we are looking at resolving are as Sarah said "Accountability, Communication, Leadership and Progress". Let me give you an example of filling the void. This is the OSM web site. Who's last been on the OSM web site recently? A couple of people. It's Joomla 1.5, it's very outdated, it's pretty much ignored by everybody, as only 3 people put their hands up, and it's boring. What does that really say about a CMS that their own web site sucks? So what is the message it is saying? Nobody cares! And is that the message we want to be saying? No! So what happens? Rumours start. Nobody cares about the web site, this guy is supposed to be doing it, he's supposed to be doing it for three years. What happened? I don't know. But somebody does care. Because the reality is that the site has been reviewed, the design has been done, the content has been done it just hasn't been published yet. So it is almost there. So the question is accountability. Why isn't it done? Well communication and reporting shows the progress. You don't need a manager sitting above you looking for someone to blame. Because to me accountability is often an excuse for blaming someone. Blaming someone doesn't help. Resolving the problem is what helps.

Reporting will show the progress and quickly and easily highlight the areas that we're stuck on. That's why it is different. Now it allows Leadership to address any issues that they see. It doesn't mean that your fellow team members have to get really annoyed with you and vote against you to kick you off and appoint on of their own people, one of their friends, to do it to fix the issue. That's not what it means, that just creates conflict. But with leadership addressing the issue progress is made and the task is completed.

So the aims of a new structure are to Increase activity, be open be flexible, sustainable and be volunteer based. When I say Activity we need ways to the increase the number of people that are involved in Joomla. It needs to be Open, democratic (I will come back to that later), and easy to understand. It needs to be flexible enough to allow new teams to be created as we need them and importantly when we no longer need that team that it can be disbanded. It doesn't sit there forever, waiting for a new task.

If we have a specific task, such as creating a volunteer portal you can create a team for that, specifically for it, and when the volunteer portal has been created that team can be disbanded. It doesn't need to exist anymore. We need to have a sustainable structure. We are all volunteers. The workload that some of the working groups currently have is not maintainable. It is too much on a volunteer basis, it's excessive, and what happens is people burn out and we lose great people. And finally, we must maintain the unique volunteer only community structure. We can't do that if the tasks that are being required of people to do their job are 40 hours a week. That is not possible to do if you are a volunteer.

So let's make the change. (I am going to quickly go through this because as we can see straight away the first three quarters of it are identical to what Sarah said.)

We start off with the Joomla community from the community we have a smaller group of volunteers. Those volunteers start to become members of working groups or teams. (Let's not get tied down about the titles of these groups). That group elects a leader. Notice the words I said "group electsa leader" not somebody above giving the group a leader. All the groupsare arranged in to areas. You can call them departments, you can call them teams it doesn't matter. But the groups in that area all have their own leader and they elect one person to represent them in their area, their leadership team. Doesn't matter again if there are four people in the team or ten people in the team they still get to elect one to the leadership team. So now we end up with many leadership teams.

So the question then is what about OSM? Where does OSM sit in this? OSM was created in 2005 to be the absolute bare minimum to satisfy the legal and financial requirements of New York State law. It wasn't tasked with running anything. The task would be the minimum required. So when we set a budget OSM signed the cheques on the instructions of the leadership team. It was a activity rather than a leadership. And that's what the biggest change in this proposal compared to Sarah's because OSM sits outside the working groups and leadership team structure. It is a separate body that is not above it's not below, it's not aside, it is separate. Because it doesn't need to be it's not part of the same structure.

So who can elect and where can a candidate come from to be members of OSM? They can come from anywhere. They can come from a leadership team, from working group, from the community member or perhaps more interestingly they can come from outside the Joomla community. Perhaps somebody with specific relevance, specific experience in working in the non-profit sector. Perhaps someone who has created another open source project because they're only the board of OSM they're not running the project. They're advisors and they're looking after legal and financial.

So who elects OSM? Who decides who is the OSM, I don't think that has been mentioned. Legally where OSM is incorporated in New York today, it has to have members and those members elect the board. That's a legal requirement of the current OSM, there is nothing we can do about that other than closing it down. So where do those members come from?

Well I offer two options. The electorate number one is that every working group leader gets a vote. This takes place once a year or once every two years depending on what the board's definition is and they're members purely for the basis of forming an electorate. Option two is a slightly different one where it is only the members of the unified leadership team. It doesn't really matter, I'm really not bothered about either one it is a detail.

The important thing is that they're elected by the community. So this is sort of an overview we can see nice big in green working groups, leadership teams. That is where all the work is done. OSM, a separate body, and carries out legal and financial task as "instructed" by the leadership team. So this is , I suggest Open, Accountable, Empowering and Bottom up. As I said before reporting fills that void.

In summary, all effective structures are always triangles the question is how steep are the angles and are the people skilled enough to carry out the roles they are given. My understanding of the proposal that Sarah presented it is a very flat triangle with a very large base and just a small rise. The one I am suggesting is a more traditional type look but with the top chopped off because there is no single person at the top.

Now in conclusion, Change Management is hard. 70% of large scale change programs in corporations did not meet their goals. That is from Harvard Business School in 1996 and lots of other research has shown that since.

But just because something is difficult it doesn't mean you shouldn't try. We shouldn't shy away from making any change at all just because it is hard. That is what has happened in the past. We shied away and said we will leave that for the next set of leaders they can look at it We've got to be brave. Just because it is hard this means you should try harder until you achieve that goal. Saying something is hard is not a good enough excuse not to do it.

On that point I would like to say thank you for the opportunity and listening.