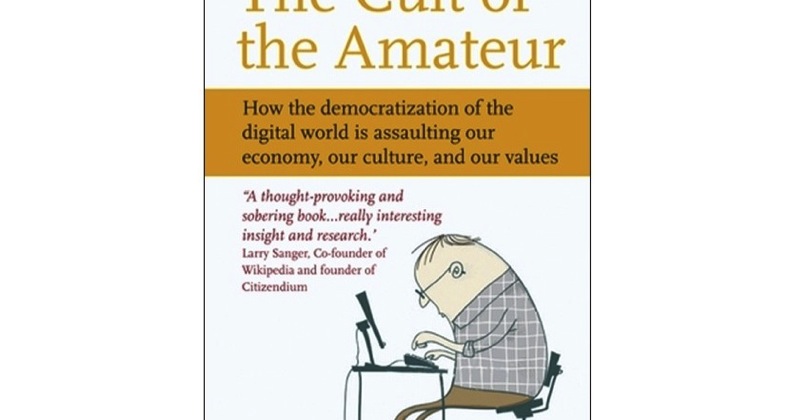 The cult of the amateur

Amateur hour has arrived, and the audience is running the show

In a hard-hitting and provocative polemic, Silicon Valley insider and pundit Andrew Keen exposes the grave consequences of today’s new participatory Web 2.0 and reveals how it threatens our values, economy, and ultimately the very innovation and creativity that forms the fabric of American achievement.

Our most valued cultural institutions, Keen warns—our professional newspapers, magazines, music, and movies—are being overtaken by an avalanche of amateur, user-generated free content. Advertising revenue is being siphoned off by free classified ads on sites like Craigslist; television networks are under attack from free user-generated programming on YouTube and the like; file-sharing and digital piracy have devastated the multibillion-dollar music business and threaten to undermine our movie industry. Worse, Keen claims, our “cut-and-paste” online culture—in which intellectual property is freely swapped, downloaded, remashed, and aggregated—threatens over 200 years of copyright protection and intellectual property rights, robbing artists, authors, journalists, musicians, editors, and producers of the fruits of their creative labors.

In today’s self-broadcasting culture, where amateurism is celebrated and anyone with an opinion, however ill-informed, can publish a blog, post a video on YouTube, or change an entry on Wikipedia, the distinction between trained expert and uninformed amateur becomes dangerously blurred. When anonymous bloggers and videographers, unconstrained by professional standards or editorial filters, can alter the public debate and manipulate public opinion, truth becomes a commodity to be bought, sold, packaged, and reinvented.

The very anonymity that the Web 2.0 offers calls into question the reliability of the information we receive and creates an environment in which sexual predators and identity thieves can roam free. While no Luddite—Keen pioneered several Internet startups himself—he urges us to consider the consequences of blindly supporting a culture that endorses plagiarism and piracy and that fundamentally weakens traditional media and creative institutions.

Offering concrete solutions on how we can rein in the free-wheeling, narcissistic atmosphere that pervades the Web, THE CULT OF THE AMATEUR is a wake-up call to each and every one of us.

[NOTE - I've been so busy reading the book that rather than try to write a poor review I decided to re-publish the publishers own synopsis. It's far better than I could do.]